Beyond net metering: Net metering is an effective and straightforward measure to minimize the upfront costs of new solar installations, but its critics point out that it places a burden on power utilities. With Utah looking to move on from net metering, here are some alternative solar subsidies around the world. From the relatively straightforward feed-in tariffs of China, to the more complex models of Spain and Germany where users are paid back in exchange for the power they actually produce, these policies are as varied as the countries that employ them. Is the U.S. set to move on from net metering? And what other policies are in place around the world that its states could employ? Source: Power Technology

The solar industry, struggling amid the pandemic, faces another threat at the FERC: a petition that would end net metering. The New England Ratepayers Association on April 14 asked FERC to declare that the agency has jurisdiction over net metering. Forty-five states allow net metering, which has helped drive homeowners to install solar panels on their roofs. The question at the heart of NERA’s petition is whether sales from rooftop solar should be deemed retail sales, which are regulated by states, or wholesale sales, which fall under FERC’s jurisdiction. NERA, based in Concord, New Hampshire, doesn’t disclose its membership. The group’s executive director, Marc Brown, is also director of government affairs at Advantage Government Affairs, a lobbying firm. NERA appears to be a trade group, not a typical ratepayer organization. Source: Roll Call

Renewables continue to break records despite Covid-19: Despite the devastating impact of Covid-19, during the months of April and May, renewable energy continued to break records, according to the Institute for Energy Economics and Financial Analysis (IEEFA). Most strikingly, April 2020 saw the Emirates Water and Electricity Company award a 1.5 GW solar tender to French energy group EDF and Chinese solar company JinkoPower. The consortium offered $13.50/MWh for the power generated at Al Dhafra, Abu Dhabi. This result is 13% below a January 800 MW solar award by the Qatar General Electricity and Water Corp at a then record low of $15.60/MWh to Total and Marubeni, highlighted in the report. 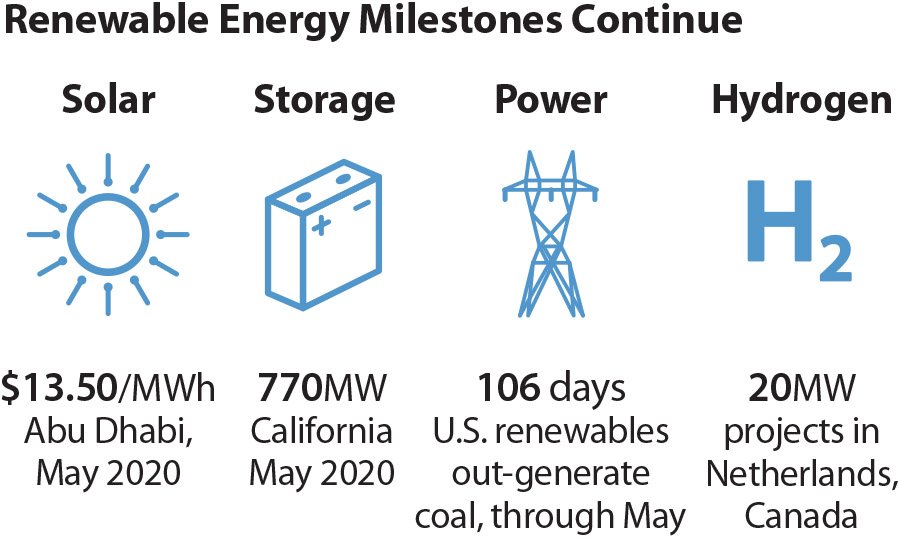 Clir Renewables has begun to launch its optimization platform for solar assets. The app allows users to open the firm’s AI-driven monitoring and optimization offering to multi-tech renewable portfolios. This AI analyzes solar asset health and performance data in the context of their environment, building an algorithm designed to support owners in developing a true understanding of the behavior of each asset. The app is being rolled out by Clir under a phased, milestone-based approach. Source: Clir Renewables

Roll-A-Rack is seeking 10 developers or solar installers to test its patent-pending Roll-A-Rack solar-panel racking system. The company claims that the system can cut racking and installation costs of flat-roof commercial or ground-based ballasted solar systems by 33%. Roll-A-Rack is offering  beta testers: